In June, Facebook made the announcement that they were changing their beloved News Feed algorithm, again. But this time, they were moving away from a News Feed that bombarded you with news and information to one that kept you on the site longer – one full of babies, kittens, or toddlers.

Instead of informing you, Facebook realized that to keep you coming back to the site they must return to what made you get an account in the first place – be connected to your friends and family.

The Guardian points out that Adam Mosseri, the vice president of product management for Facebook’s news feed, wrote, Facebook is in the business of giving you what you want.“That’s why stories in news feed are ranked – so that people can see what they care about first, and don’t miss important stuff from their friends,” read the note. “If the ranking is off, people don’t engage, and leave dissatisfied.”

Needless to say, businesses, news agencies, and the internet freaked out worrying the days of  Facebook traffic were over. Why? Because, As Parsley reports, Facebook accounts for 41.4% of referral traffic to news sites. And according to the Reuters Institute 2016 Digital News Report, 51% of those surveyed reported using social media as a source of news each week, with 28% of 18-24 year-olds citing it as their main source of news. The internet viewed this change of the end of “going viral”, in fact, many made it seem like this was Facebook armageddon.

We’re here to tell you that you’ll have to wait for Armageddon. Yes, we’re only a few months from Facebook’s newest tweak, but we’re here to tell you that this isn’t the end of social media. In fact, if you’re a cannabis business that creates your own content (and you should be, but that’s a subject for another blog post) you’ll be okay. So, why is this good news for content creators?

This is essentially still true today, although you may have to refocus your efforts on creating fresh content. Why? Facebook no longer puts more weight on news outlets and other brands. That means if you’re the originator of the content, and it’s content that moves people to share it, then you’re more likely to have that post reach a larger audience.

As Parul Guliani of Forbes writes, “As the announcement explains, news posts shared by your friends will still show up at the top of your feed…And its new algorithm change which prioritizes posts from individual users over businesses and media companies is another attempt to get people to share. And even if most people aren’t sharing, it’s going to look like they are because the posts from those who are will surface to the top of their friends’ News Feeds.”

So, while Facebook’s algorithm may have changed and you’ll see more updates from your friends and family, if you create strong content that’s interesting, your audience will share it, and your reach won’t be affected. That’s the most important thing. Here’s an example of content that may do well: 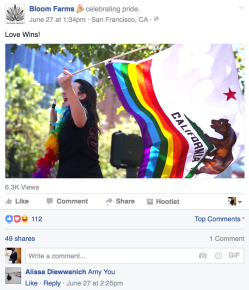 Don’t let your fears hold you back – people are ready to hear your story or message, but as a business, you’ll  just need to create compelling content (videos, images, blogs, memes, and infographics) that resonate with them in a way that they are compelled to share. What companies do you think exemplify strong content creation? Let us know in the comments below. As always, feel free to contact us at Refined Bud – we’re ready and able to answer any questions you may have about Facebook’s frenzied attempt to take over the world.

Look for a blog next week on content creation for cannabis businesses.